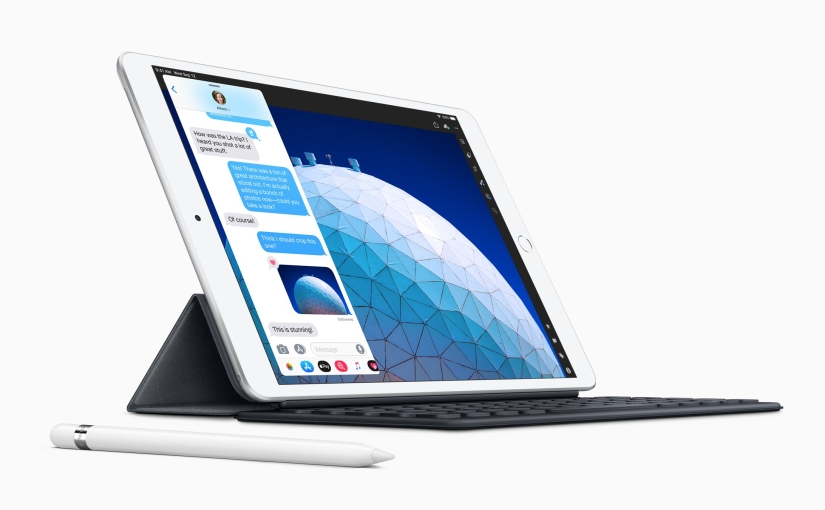 Early this morning, Apple silently refreshed its online store with the new iPad Air and iPad mini. The new, mid-range iPad brings back the beloved Air name, but packs iPad Pro features in a smaller, and cheaper package. Here’s everything you need to know about the new iPad Air.

In a press release, Apple says the 10.5′ inch iPad has “twice the graphics capability, and the advanced Retina display with True Tone technology is nearly 20 percent larger with over half a million more pixels,” than previous iPad models.

A12 Bionic and the Apple Neural Engine

The new iPad Air, Apple replaced the A10 Fusion with the powerful Apple A12 Bionic chip with an M12 co-processor and Apple’s Neural Engine. The iPad Air also packs in a 4-core Graphics Engine for stunning graphics, incredible augmented reality experiences, and photorealistic effects.

Apple touts the A12 Bionic chip in the iPad Air as “The Apple-designed Neural Engine of the A12 Bionic chip powers the next generation of apps and iPad workflows using advanced machine learning and Core ML for engaging AR experiences, photo-realistic effects in 3D games and stunning graphics performance within apps.”

“The A12 Bionic chip with Neural Engine enables a whole new level of power and intelligence. It uses real‑time machine learning to transform the way you experience photos, gaming, augmented reality, and more. With all this power, you can edit a video. Create a beautiful presentation. Design a 3D model. Stream your favorite show. Or do all of those things at once,” says the iPad Air website.

Despite having the A12 Bionic chip and Apple’s Neural Engine, the mid-range iPad Air does not feature Face ID or True Depth. Instead, the cameras on the iPad Air remain relatively unchanged from the cheaper $329 iPad.

In the press release, “The front and back cameras on iPad Air let you take stunning photos and 1080p HD videos. But you can also do much more. Make a Group FaceTime call. Scan a document, sign it, and send it back. Or create new worlds by using the camera for augmented reality experiences.”

Much like the older iPad, the design remains unchanged. The design of the 10.5′ inch iPad is still very much an iPad with it’s rectangular, rounded-off aluminum chassis.

Like iPad Pro, the 10.5′ inch mid-range iPad features a smart connector on the rear that supports an Apple Smart Keyboard. Also, the mid-range iPad Air has Apple Pencil first-generation support.

Apple also chose to keep the 3.5 mm headphone jack, something that has been disappearing from the lineup over the last few years. Touch ID remains as the biometric security sensor of choice.

3 thoughts on “iPad Air: Here’s everything you need to know about the new mid-range iPad”